A song for today

Complete with a semi awkward slideshow of Pat Green... just minimize and listen.

Posted by Unknown at 8:33 AM No comments:

Hello! It's been a while since I've been around these parts... let's catch up!

Sam and I decided it was time to begin the demo for the laundry room. Since the house was built in the late 50's this room has been a bonus room, but it was never designed for a dryer. So we had lots of hurdles to get over like:

Demoing the old cabinets that were space hogs, and not practical for the tiny room.

Cutting a new hole in the side of the house to relocate the dryer (who's vent was initially going through an old  window...long story.)

Moving the water heater out of the middle of the room.

And getting a long drain for the relocation of the washing machine. 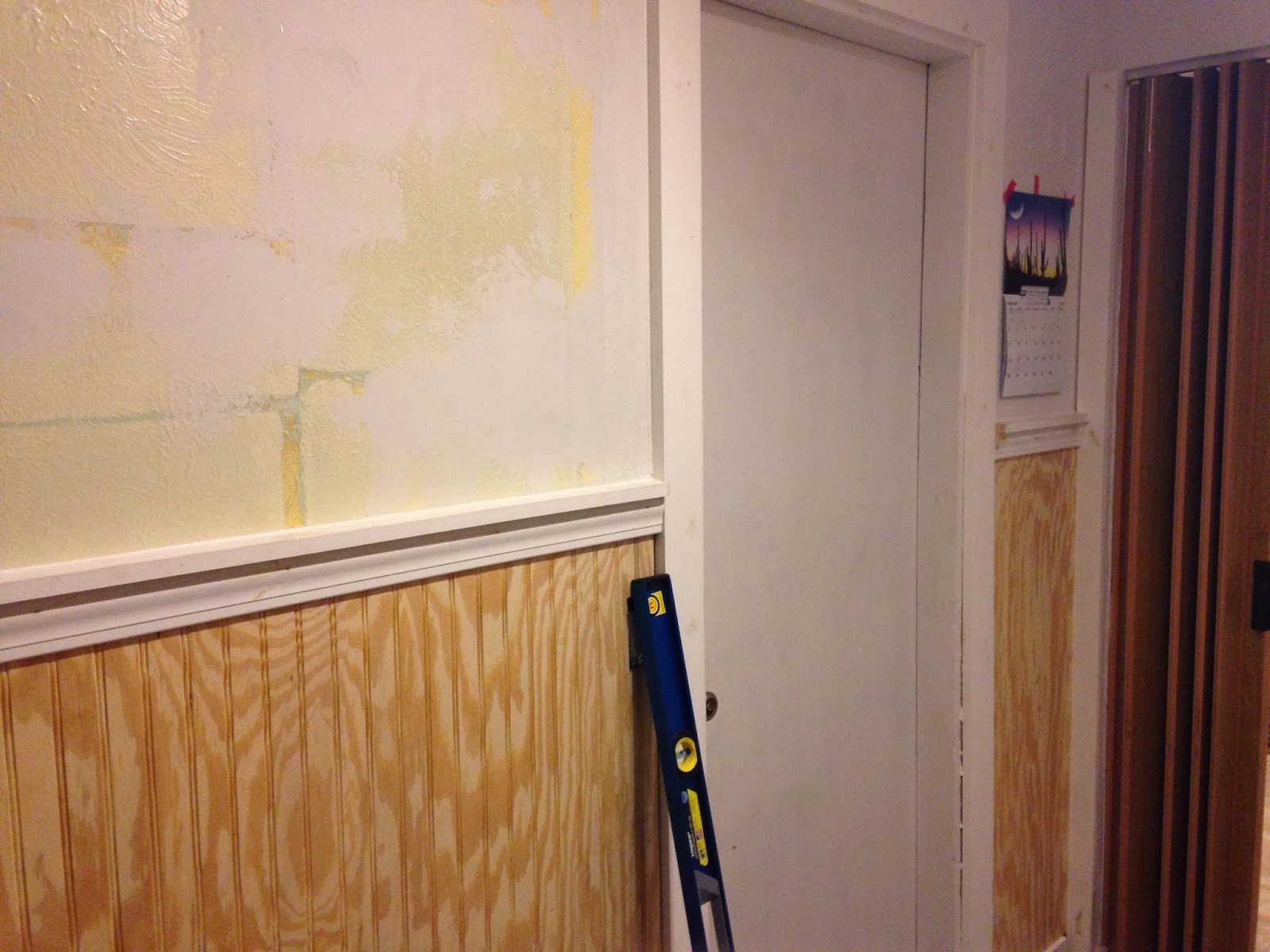 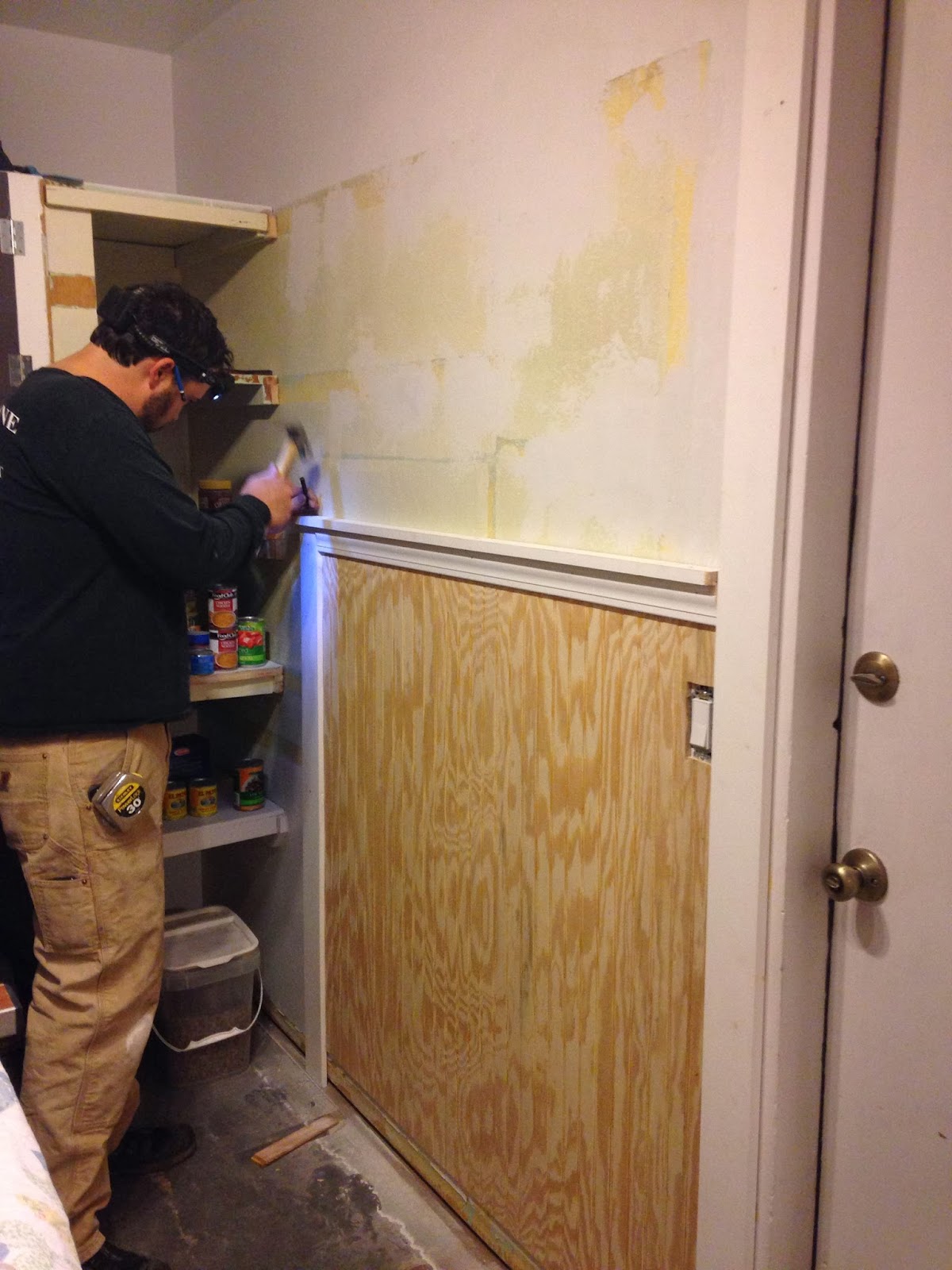 And of course, adding pretty things like bead board wainscot and new trim around the doors.

Since we really only have evenings and weekends to work, it's been a challenge, especially having company in the middle of that. We no longer have a place to keep our food, so the kitchen is overflowing with everything that used to be in the laundry room/pantry. But the parentals don't mind! 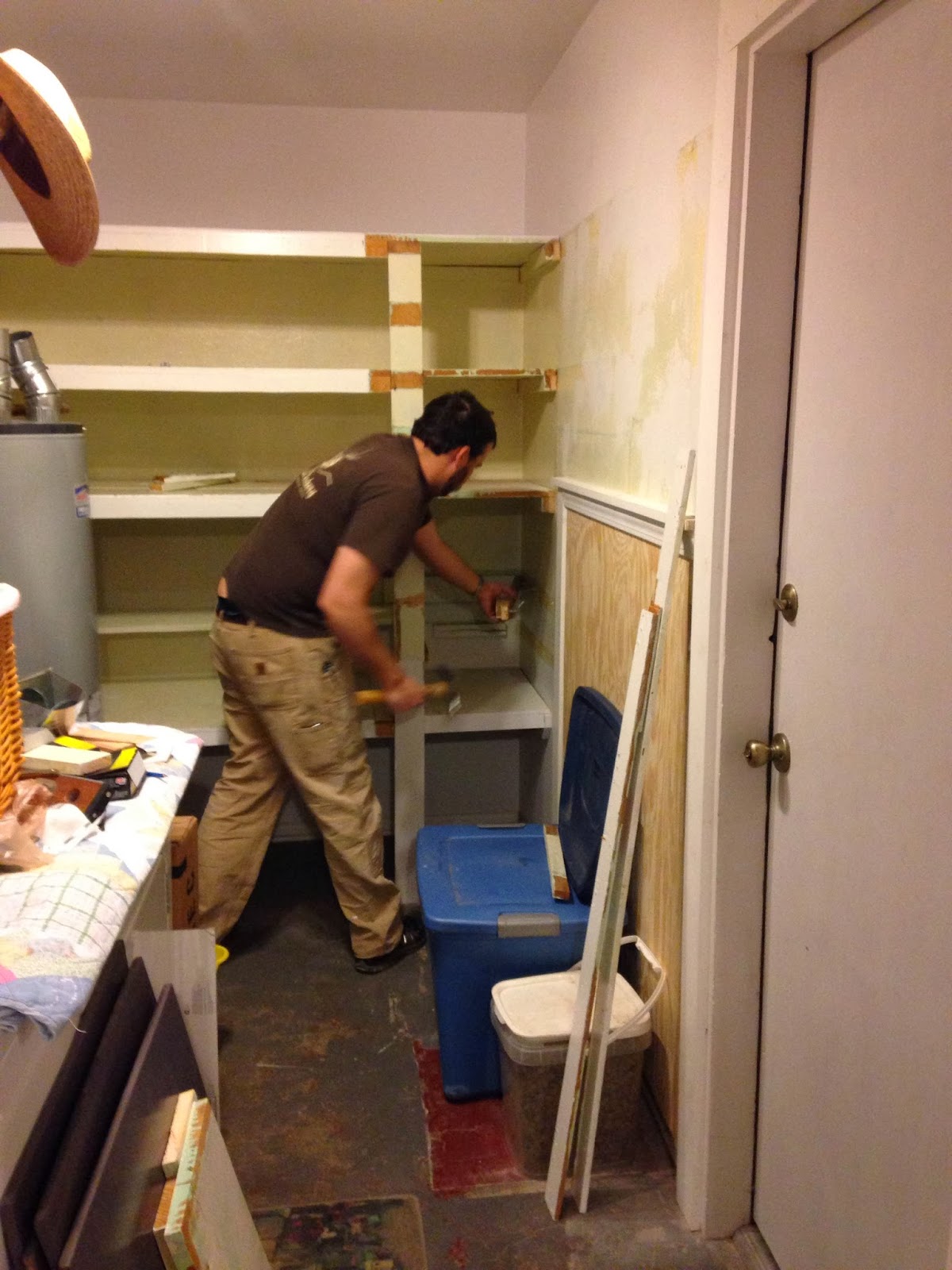 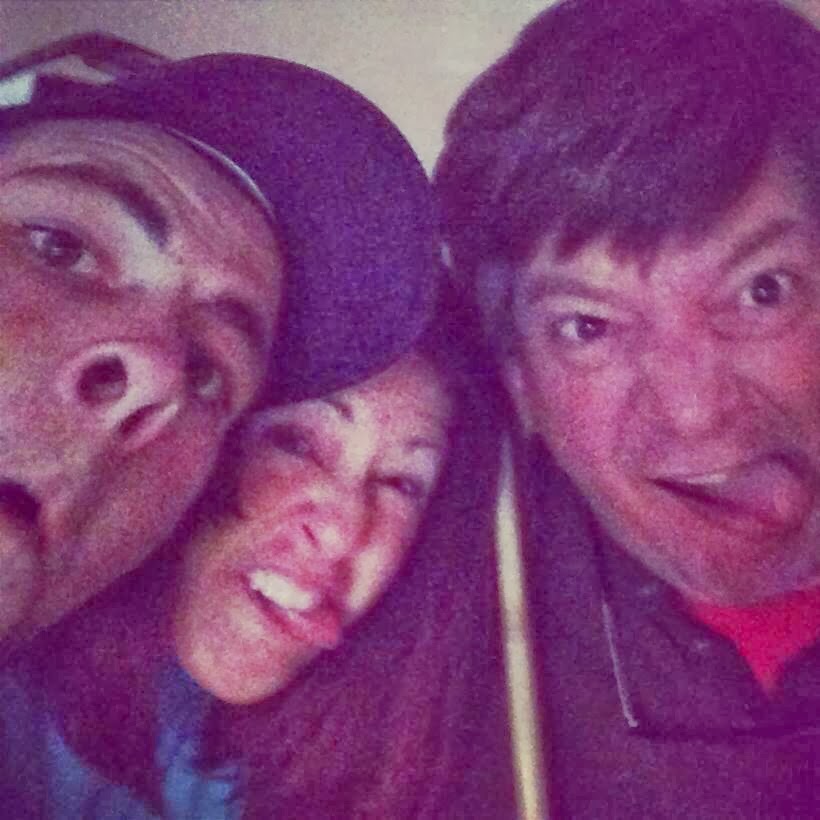 They came to watch Weston's last home game for the NAU IceJacks for Senior Night! I can't believe my brother and I will both be done with college this year (let's not talk about how long I've been done for ha!) 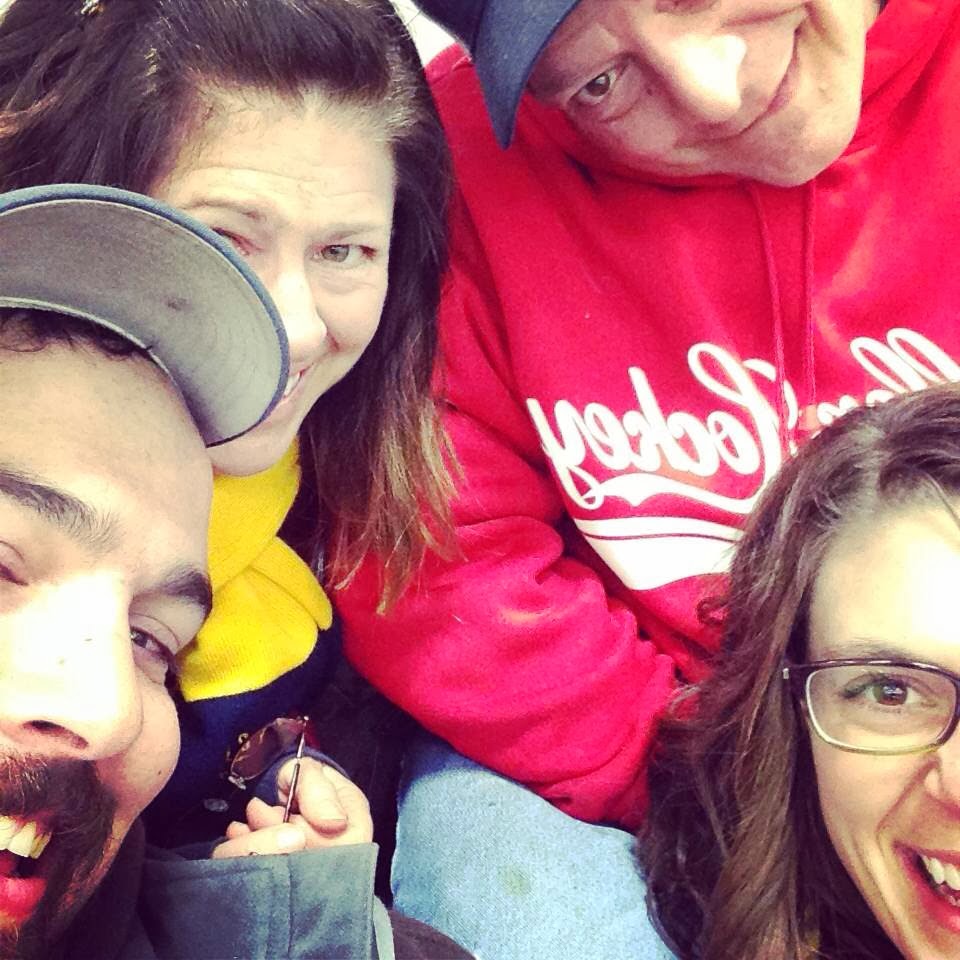 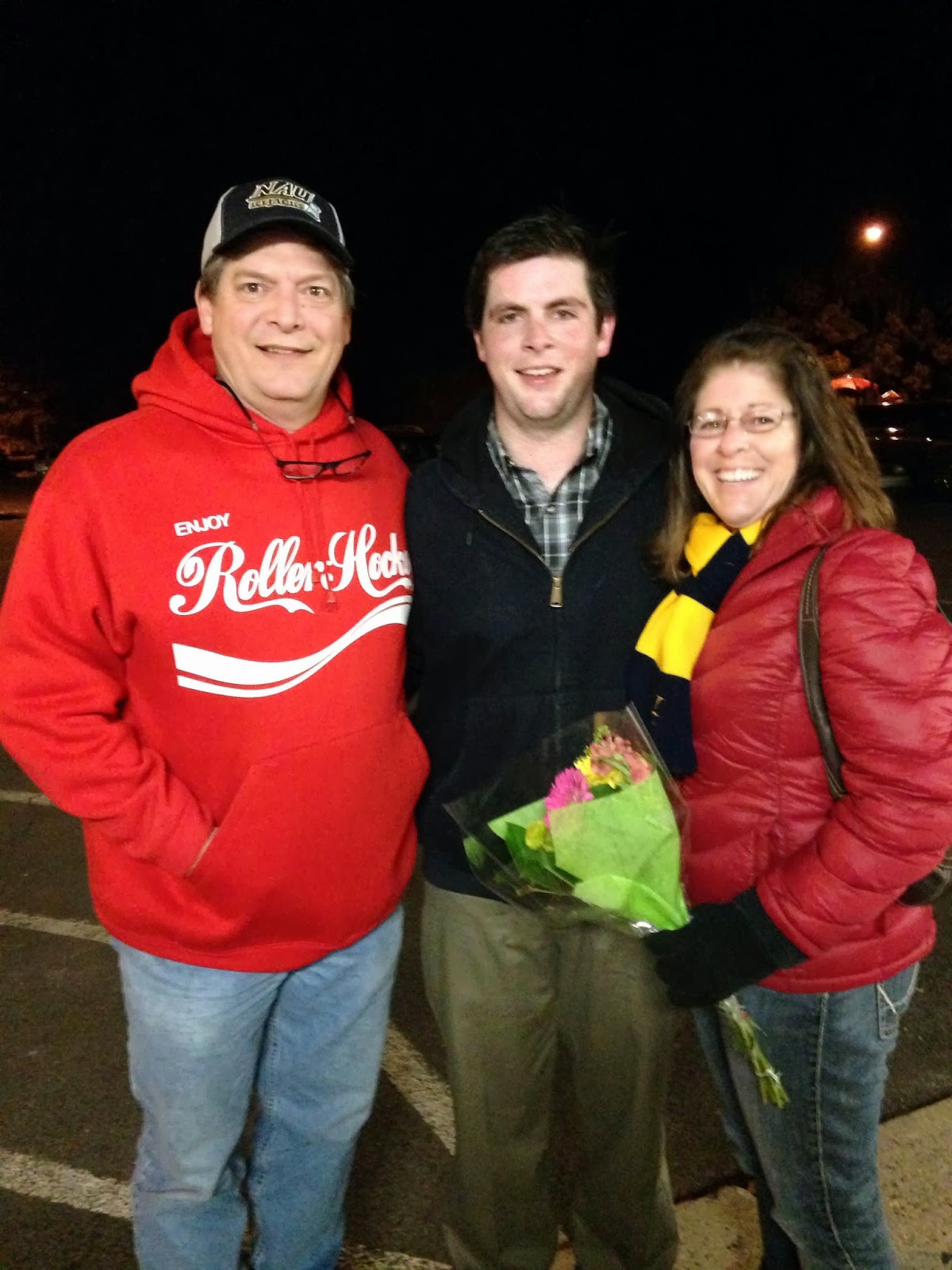 I whipped up a great pot pie for the family and topped it with sweet little hearts. 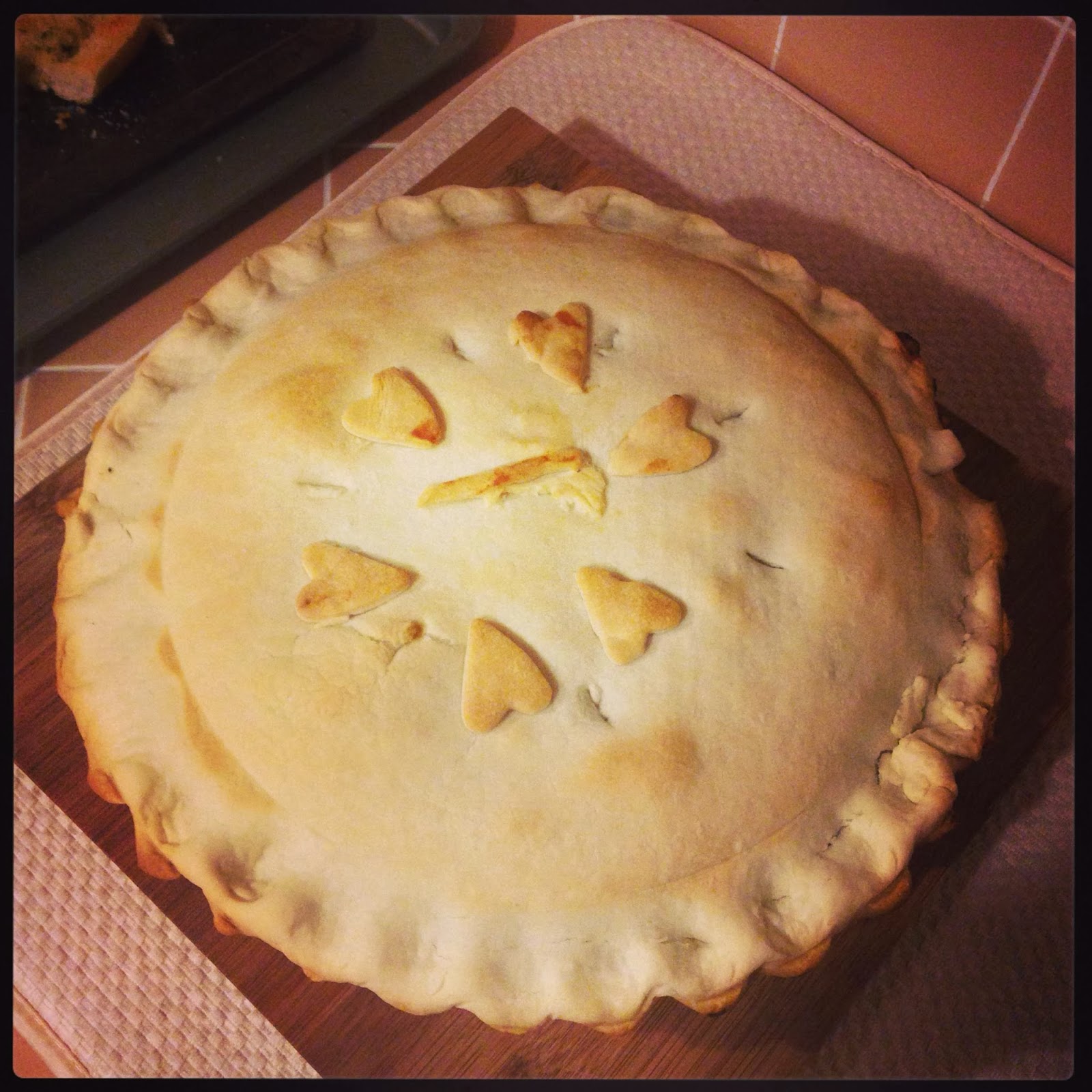 And more demo continued as the family headed out. The room had a window at one point that faced the backyard. A shop was then added on to the house and someone merely covered the window with plywood. So while I was at work on President's Day, Sam took out the window and began replacing the drywall.

In the picture below, the water heater has been moved to the far corner, and the dryer is in it's permanent home. 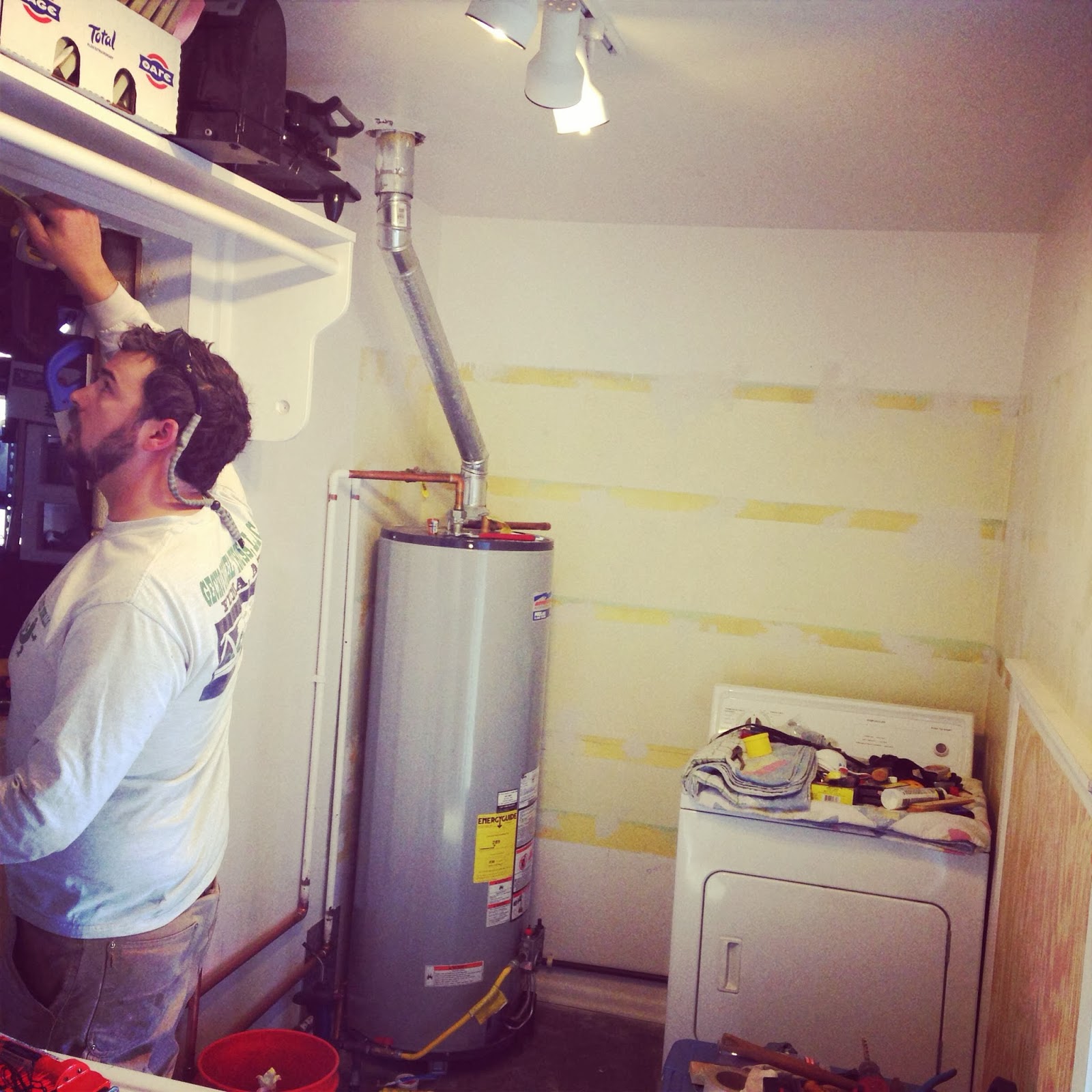 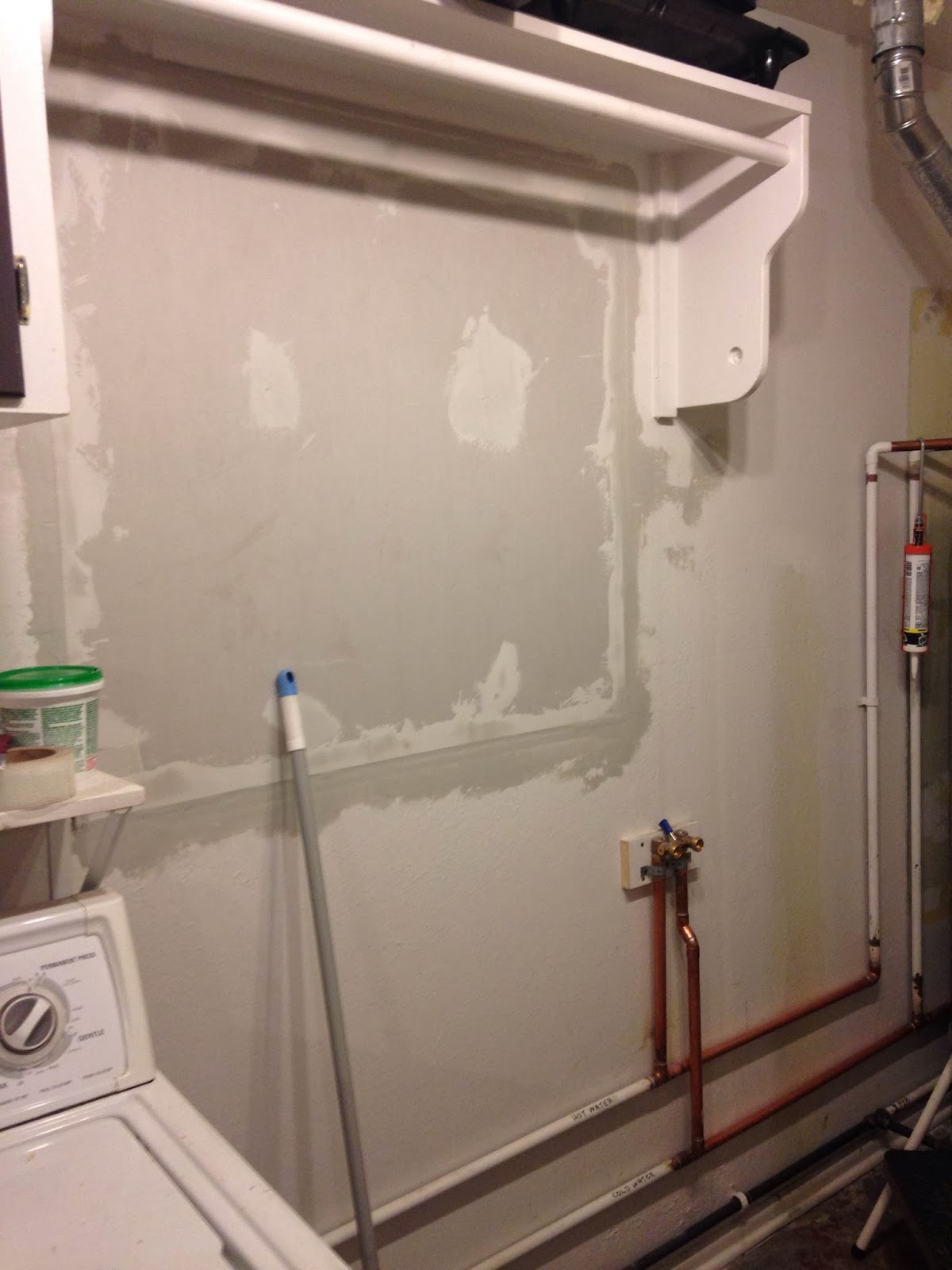 I began an easy project for myself, to be hung in the office eventually. But ran out of corks...guess we'll have to drink some more ;) 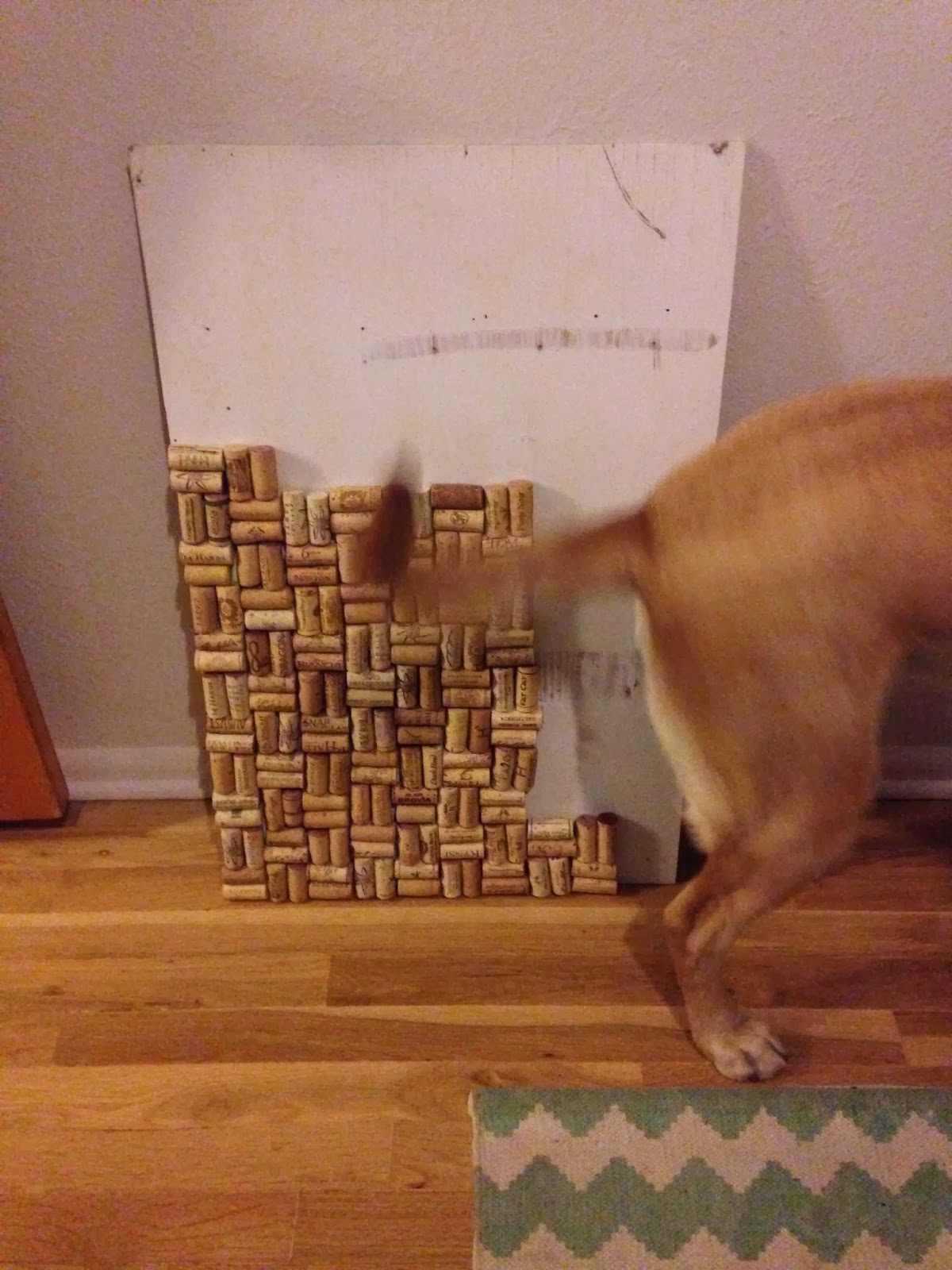 And after many many trips to Home Depot, Kona finally figured out that sitting on the cart was easier than walking. She also know that people wearing aprons also carry cookies. So we now have a fat and lazy dog. 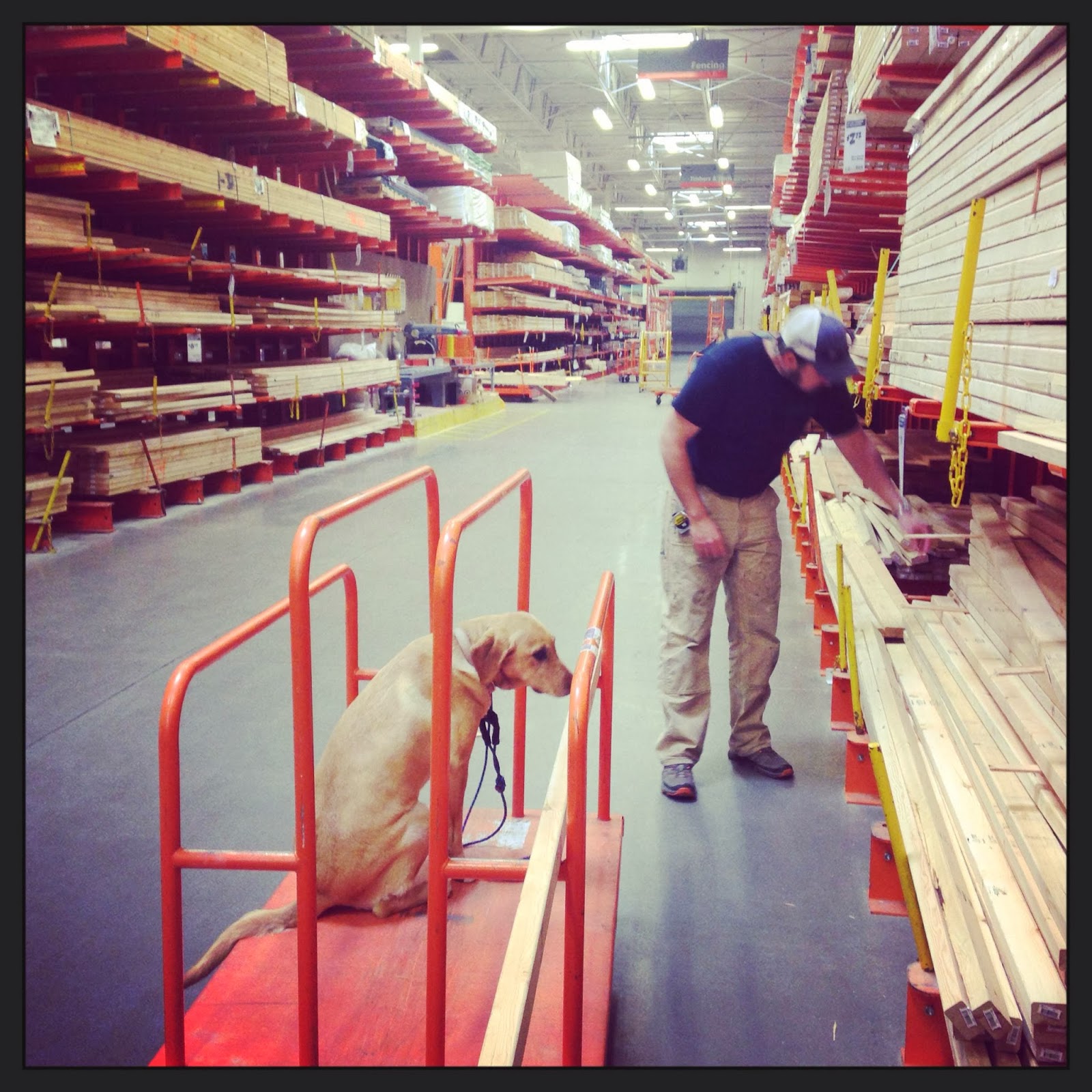 Just this past weekend, while Sam slaved away on more projects in the laundry room, I finally tackeled the task of removing the fabric and padding from this chair. A project that had intentions of a good beginning when my MIL was about my age, this chair was handed down to me about 1.5 years ago and has since sat on the back porch...which made us look like real winners I'm sure. Since the foam on the inside was rotted, it was leaked orange dust with every move and couldn't be kept inside....and we don't have a garage, so there.

It no longer leaks orange dust, but I also don't have the funds to buy good quality foam right this moment. It's on the list of things to save for. And I also don't have any plans for the fabric to reupholster it either...any suggestions? I'm thinking a crushed velvet or bright floral pattern. 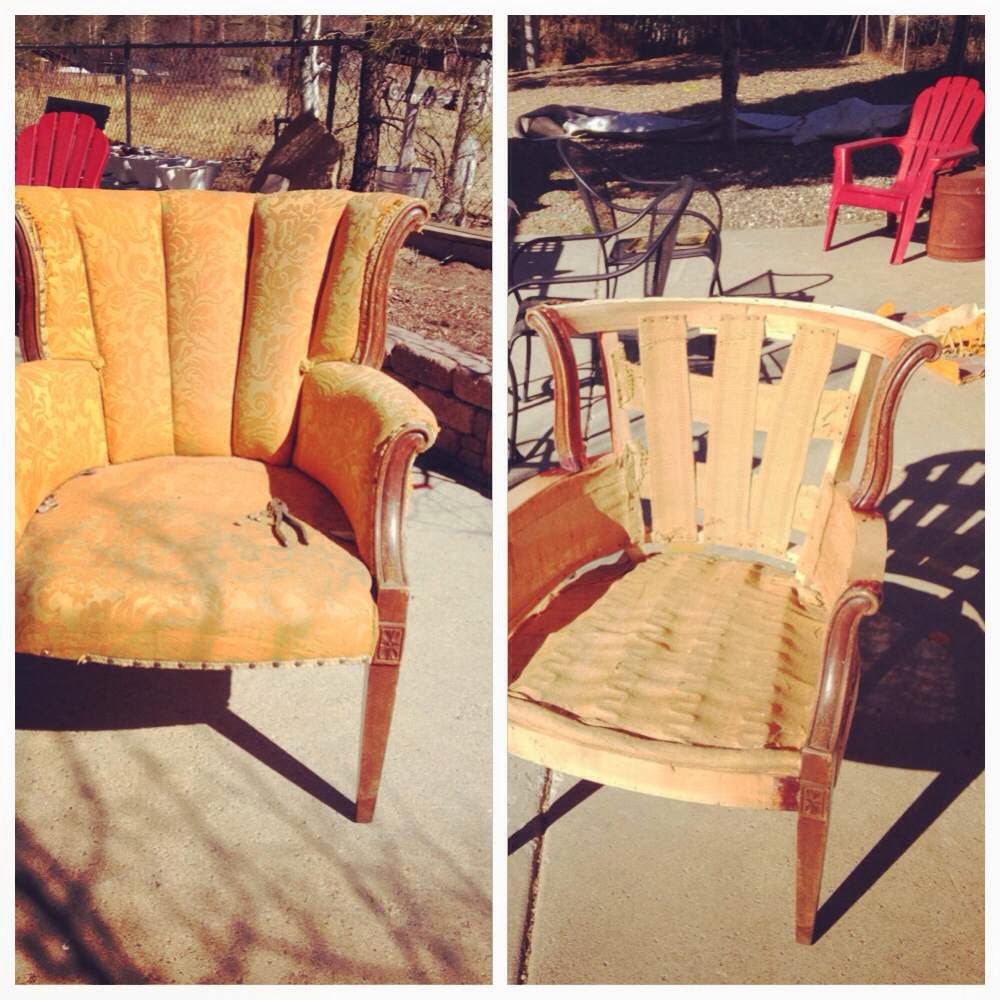 While I was pulling out tiny little nails (only about a million of them) Sam was building the frame for the storage closet that will hide the water heater. Since this photo was taken, it now has walls!

And PS -- what a stud muffin I married! 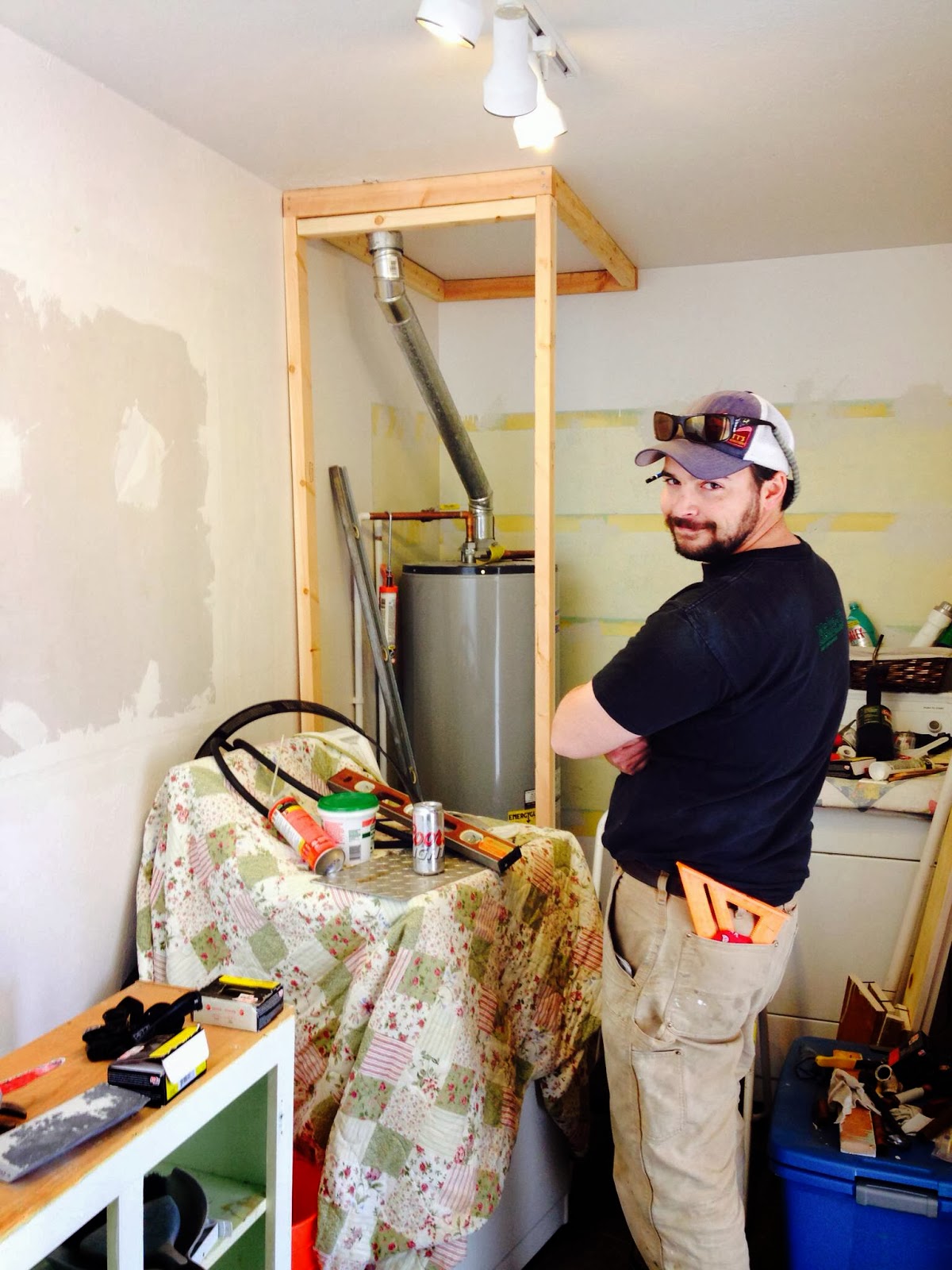 And to thank my man for all his hard work, I made him homemade French Onion soup with toasted Harvati and it was AMAZING....if I do say so myself. 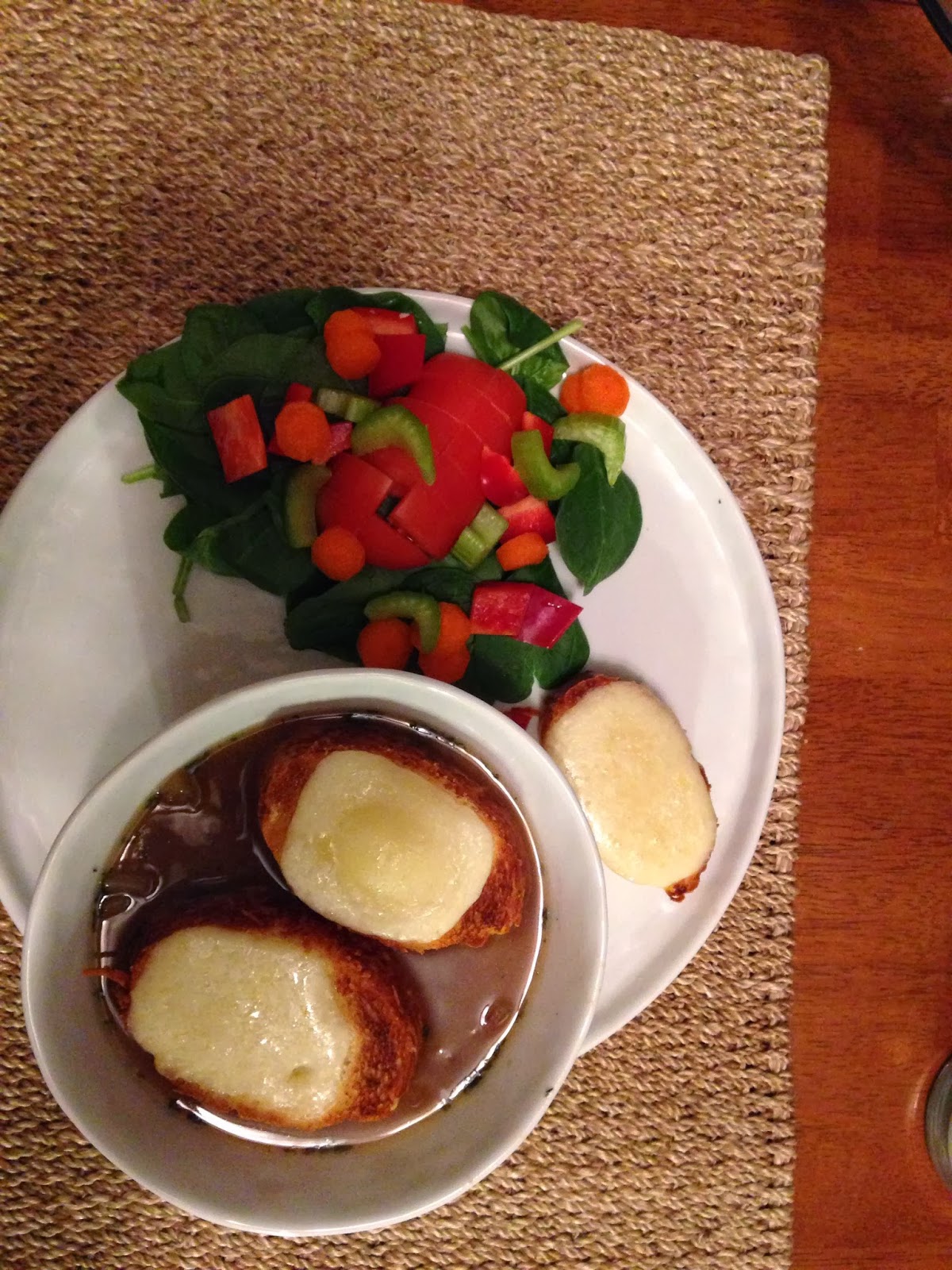 Hi! I'm Leah, and this is my hubby, Sam. We are jumping head first into life together as husband and wife with our dog, Kona. Floral and Ivory is a place to document our adventures, so hang out and see what's going on around here! And be sure to check out our Etsy store: Floral and Ivory!